A New Era for Rubel Castle 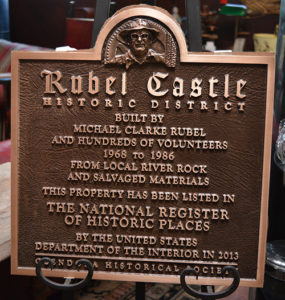 On Thursday morning, August 2nd, 2013, a small group from the Glendora Historical Society (GHS) were in Sacramento to witness the California Historical Resources Commission render its final decision. We sat through discussion covering all manner of sites; a vandalized trolley car, an overgrown high-elevation Olympic training track, a average-looking restaurant petitioning to move 20 feet away from Historic Route 66 to better avoid errant automobiles. All were interesting in some way, but nothing as captivating as a Castle. The hearing process was organized and thorough, with a slide show for each issue and a professional-sounding reader to call out descriptions of each subject.

When it was time to consider the Castle, the room livened up. Although the reader was delivering the descriptions as dryly as he could, there was levity and a few chuckles along the way. Then with a call for a motion, a second and a final vote, we had our answer.

Seeking historic status for a site is straightforward, until you run into the esoteric aspects of what makes the site special, and we ran into a myriad of road-blocks. How should we describe our "period of significance" or define the "distinctive characteristics in the method of construction?" The first application, completed like a pro by then GHS president John Lundstrom in 2005, made a strong case for our older buildings, but the state office decided that our relatively young Castle Complex (completed in 1986), overshadowed those buildings and did not meet the 50-year age requirement.

The first rejection did not deter us, we knew the Pharm had all the right ingredients to achieve recognition. We were convinced our Castle qualified under the "exceptional importance" clause, partly because there are so few sites anything like it with which to compare. The trick would be to narrate the history of the entire site as a complete story. The application would have to include not just the Albourne Rancho beginnings, but the activities of more recent inhabitants, Michael Rubel and his Pharm Hands. Writing such an application seemed to become more elusive the more we worked at it. It would require finesse in stringing together a couple of disparate State requirements, and we finally agreed that this would not get done without professional help.

This is what led us to begin asking for advice from specialists in the field of historic preservation. All of them agreed that we had a certain winner, while admitting that the application would be tricky. Despite the impressive portfolios provided by the professionals we spoke to, all said they had never visited anything like Rubel Castle. After a few rounds of proposals, we selected Historic Resources Group (HRG) to be our consultant. For a year our own team worked closely with HRG as they peppered us with questions and spent countless hours photographing, mapping and describing each structure in great detail.

We had great confidence in the application prepared by HRG, but were determined to do all we could to convince the Commission. We appealed to Historical Society members, teachers, scholars, neighbors and Pharm Hands to help us out. A few months before the hearing date volunteers got together to draft and send out letters and emails, which resulted in about 400 letters of support for our nomination (and zero in opposition). The mail received by the State included scores of drawings and writings from local school children. Some of these crayon drawings were shown as part of the slideshow at the hearing.

What a gratifying morning! Quite a few volunteers worked on this project over the years. The only thing that could have made the day more complete would have been to have all the Pharm supporters, builders and letter writers filling every seat in the auditorium.

The application put together by Historic Resources Group is a remarkable document (read it here National Register of Historic Places Application).

It is in the archives of the State of California, and, after final approval from the Keeper of the National Register of Historic Places, will be kept by the National Parks Service.