The Glendora Historical Society was founded in 1947 to help preserve the history of the people, Glendora, and the area around Glendora, "The Upper San Gabriel Valley" and make it available to future generations.

The Society has two properties for the public to visit
The Museum at 314 N Glendora Ave, open most Saturdays 11:00AM to 2:00PM and the Rubel Castle at 844 N Live Oak Av.
Please visit Rubel Castle for specific information regarding tours.

Open to the public.
The Society’s general meeting occur at 7:00 PM in the Bidwell Forum of the Glendora Public Library (140 S. Glendora Ave.) on the fourth Mondays of the months of January, March, May, July, September, and November. Enjoy many speakers presenting a wide range of interesting topics!

Membership
The membership dues of the Society are $15.00 per year. The fiscal year starts June 1st. Lifetime memberships are $150.00. JOIN NOW, no matter where you live!

Formation of the Society
An interest in the areas history was encouraged by the Board of Directors of the Glendora library in 1946. 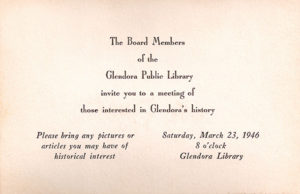 In 1946 the public was invited to a meeting of those interested in Glendora’s history to share photographs and their information about the past. Approximately 80 people showed up for this first meeting to consider the formation of an organization to collect and preserve Glendora's historical data and landmarks. Rev. Tincher, Jr. presiding as chairman, extended a brief welcome, gave the library boards reasons for calling the meeting, then outlined the value of the historical organization to the community. Mrs. Louise Thum, President of the Library Board, explain the purpose of an historical organization and appointed the following committee: H. Paul Keiser, Chairman; Mrs. Mabel E. Keesling and Mrs. Helen K. Bettin, to make necessary investigations and report back to the Library Board with recommendations. A second meeting was held to consider the organization of the society on April 12, 1947 at the Wilson School Auditorium. Before the meeting Helen Betten had been asked by the library board to gather as much information about the early history of Glendora as people could be found. A group of people, the first Board of Directors, we’re name to to direct the organization of a Glendora historical Society. These were as follows: Miss Inez Cook, J. Walter Cullen, Mrs. Hazel M. Domer, the City Librarian and the founding member of the Society, Albert Gnagy, Mrs. Ruth P. Kimball, Darrow H. Sellers, Mrs. Louise Thum, Herbert C. Warren, Mrs. Virginia P. Wathen, and H. Paul Keiser, Chairman of the Committee.

April 15, 1947 was the first official meeting of the Board of Directors at the Wilson School. Officers were elected: Mrs. Ruth P. Kimball-President (author of a history of Glendora written for the 50th anniversary, Golden Get Together 1887 to 1937 program), J. Walter Cullen-First Vice President, Herbert C. Warren-Second Vice President, Mrs. Virginia P. Wathen-Secretary, Darrow H. Sellers-Treasurer, and H. Paul Keiser-Curator. A committee was chosen to draft a suitable Constitution and By-laws for the society to be approved at the next meeting.

The second meeting of the Board of Directors was May 16, 1947 again at the Wilson School. The draft of the Constitution and By-laws was submitted, corrections made, and the corrected version was adopted by unanimous vote. The society was started with 162 charter members, charter membership was open one year after the society was founded. 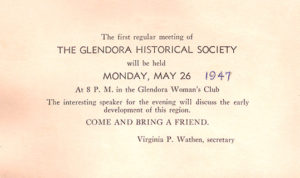 The first general meeting of the Glendora Historical Society was on May 26, 1947 it was held at the Glendora Women’s Club. Over the years general and board meetings have been held in different locations, many at Glendora Woman’s Clubhouse, the Fellowship Hall of the Brethren Church, member's homes, and the Museum. Meetings are currently held at the Bidwell Forum of the Glendora Public Library and Cultural Center.

Through the years many dedicated people have devoted countless volunteer hours to the Society. Their efforts continue to help preserve the history and educate the public about the development of Glendora and the upper San Gabriel Valley.

The Historical Society participating in the 1969 Glendora Christmas Parade, Mr. and Mrs. Richard Davis in the front (owners of the car) A. Bell in the middle, Dorothy Rubel in the back (large hat) with an unidentified passenger. 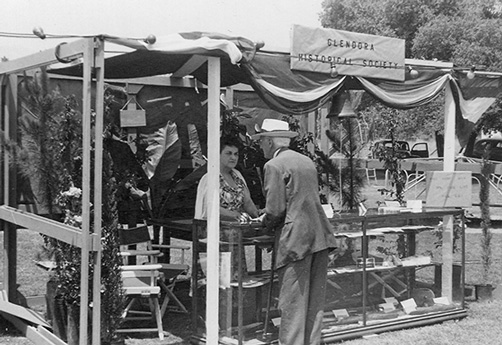 Historical Society booth at the 4th of July Celebration, 1951 - Mrs. Hazel Domer the City Librarian, and founding member of the Society, is in charge of the booth.